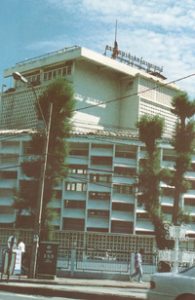 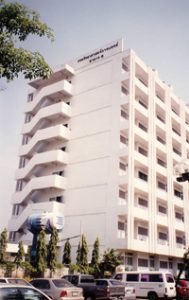 Bureau of Quality and Safety of Food is one of an important sections in the Department of Medical sciences, Ministry of Public Health, and it was established together with the Department of Medical sciences. At the beginning, the responsibility of this bureau was undertaken by the pharmaceutical division in the Department of Sciences, Ministry of Economics, which located at Pak Klong Talad, Bangkok. The laboratories at there were responsible for analyzing food products and drugs from the Customs Department in order to get benefit from inbound tax. In that time, Ph.D. Prachuap Bunnag, who graduated doctoral degree from Germany, took a position of director of the division; moreover, there were some colleagues, 3 doctors, 2-3 pharmacists, and 1 chemical scientist, who worked with him. When the Department of Medical Sciences was established with Ministry of Public Health in 1942, the pharmaceutical division was moved to be under this department and set up the chemical section which was responsible for food, milk, and water analysis. This section was also capable for analyzing the poison. In addition, there were the microbiology laboratories for disease diagnosis and food, milk, and water analysis.

1960 : The division of food and beverage analysis was moved from Pak Klong Talad to be gathered with others division at Yotse, Bam Rung Meuang Road, Maha Nak, Bangkok or Department of Medical Sciences, Yotse. It was two-storey building, and each storey consisted of three rooms, which were small-size rooms and did not have any hoods. However, The division of food and beverage analysis had extended the capability to protect the consumers by providing the analysis of food additives and food contaminants in canned foods, vitamin in foods. They also extended the food analysis service in the regional center by assigning the diagnosis sectors, which used to analyze water regarding to microbiology, to responsible for chemical analysis.

1972 – 1976 : In 1974, The division of food and beverage analysis was renamed to be the division of food analysis and redistributed the units from 4 to be 6 which were responsible for food, beverage, water, pesticide residues, toxins and food additives, and administration. They also extended the scope of work to cover both domestic and exported products.
1977 – 1981 : The division of food analysis increased the units to be 7 by adding the unit for analyzing exported foods, and they received fund to construct the 10 storeys laboratory building. At that time, their scope of work was larger. There was the development of analytical methods for foods and food contact materials. Moreover, they also studied the regulations of imported foods in other countries. The division of food analysis has published the researches to public which was risk communication, one part of the food risk assessment process that was in the limelight. Furthermore, they also provided training courses to the analysts from food industries that could improve the quality of their products to meet the standard quality, and World Health Organization (WHO) gave scholarships to the Indonesian officers for observing and training at The Division of Food Analysis.

1982 : The new 10 storeys building was completely finished. The laboratories in there had many facilities and security stuffs for the perfect and best operation in that time.

1983 : There was the establishment of 6 regional medical sciences centers which doing 4 main works, food, drug, toxicology and clinical pathology. At the initial time, there was no permanent employees, so the staffs from each sectors had to relay to do the duty every 1 month. That was the first step to extend the area of work to other provinces.

1984 : The exported food analysis was performed in regional center, and the regional medical sciences center Songkhla took responsibility for that. It was done to support the increasing of exportation of frozen seafood products from the private sectors. In that time, the Division of Food Analysis was improved its efficiency to get into the international level.

2002 : There were the reformation of government system and reorganization of each government sections according to the regulations of ministry of public health. Therefore, the bureau of quality and safety of food was established on 9th October 2002 due to the government administration act, (issue 5) B.E. 2545 and reorganization of ministry, sub-ministry, and department act, B.E. 2545, which was announced in royal Thai government gazette, volumn 119, chapter 103 ก that reassembled the division of food and division of exported food. There was Mrs. Chanchai Jaengsawang being the first director and Mr. Aran Thanankat being the present directior (B.E. 2562).